It's time for a brief history lesson.

The Greeks in 400BC thrived as the greatest civilization on Earth. They conquered lands, built great halls of learning, and celebrated life and love with their many deities. One of their favorite deities was Dionysus. The God of wine represents not only its intoxicating power, but also its social and beneficial influences. He is viewed as the promoter of civilization, a lawgiver, and lover of peace, as well as the patron deity of agriculture and the arts. He was also known as the Liberator, freeing one from one's normal self, by madness or ecstasy.

Unfortunately, one of the side effects of courting Dionysus is the hangover. In order to relieve its citizens of the dreadful morning after Greek Healers found a curing gemstone. A curious purple rock they bequeathed Amethystos 'The Amethyst' literally translated as 'Not Intoxicated'. These early physicians would lay patients on beds of amethyst, cover them with blankets of woven amethyst, sit them in caves where amethyst was present in the walls, or crush the stones into a powder and mix them into an elixir to be taken internally. The results were a calming, grounding and soothing affect delivered to their patients.

A few centuries later, in the east, holy men and physicians made it known the healing qualities of amethyst were characterized as purifying, pacifying and transitional. Amethyst has the ability to transform lower energies into higher. Amethyst is known to calm and protect the mind. It soothes those who have engaged in constant rigorous mental activity. It has been deemed "nature's tranquilizer" by many healers because of it's effectiveness in relaxing not only the mind but also the nervous system. Those who wear amethyst jewelry and who have been recommended to wear this stone for healing purposes have done so because of its tranquil qualities and its ability to reduce negativity and alleviate anxiety.

Amethyst was identified as a crystal that functions favorably in clearing certain types of blockage and in aligning the Chakras. By transforming energies on all levels amethyst also has the ability to balance and stabilize energies located within certain Chakra areas. Amethyst is related to and found to heal and align ailments of the 6th and 7th Chakras, which are the Third Eye or Brow (6th) and the Crown (7th).

Amethyst aides the 6th Chakra, Third Eye, by opening and heightening awareness. Its calming qualities help to awaken and ease stress in this area. It helps to also heighten perspective and allows development of strong introspection (inner-self view).

The 7th Chakra, or the Crown controls the energies used in any mental activity. Amethyst helps to relieve strain or tension in this area. It is considered a helpful aide in meditation and in the facilitation of psychic visual enhancement. It's tranquil sobering effect allows those who are energetic to relax. It also is a cure for insomnia and nightmares.

As the Greeks gave way to the Romans, the Huns and finally the Europeans of the later centuries, modern science took apart the Amethyst. It is a form of SiO2 (Silicone Oxide) gets its predominantly violet color from alternate layers of right-handed and left-handed quartz. Its hardness is rated a 7 on the Mohs scale with 1 being Talc (Chalk) and 10 being a diamond. This explains why it fractures quite easily and that it is rare to find large cuts of Amethyst Jewelry anywhere in the world. Thus Amethyst has an irregular pattern in the quartz world and produces some yet scientifically unexplained characteristics with its refraction, conduction and emission of light. Recently it has been discovered that the violet color is attributed to certain iron constituents in connection with a naturally occurring ability to store and radiate light over time. Maybe scientists found out what the early healers already knew.

What scientists learned from these historic flights was that conducted heat alone was not enough to keep these monkeys happy in the extreme cold encountered in the vacuum of space. In order to simulate the sunshine encountered on earth scientists designed a suit capable of producing Far Infrared Radiation to insulate the apes on future space missions. The apes came back more vibrant with better physiology then their predecessors.

Far Infrared Radiation (FIR), what is it about this energy source our bodies enjoy. Why is it that we feel so good in the warm sun light? What makes us feel good when another human touches us and we feel the heat and warmth of their touch? Far Infrared Radiation is that part of the electromagnetic spectrum with longer wavelengths. 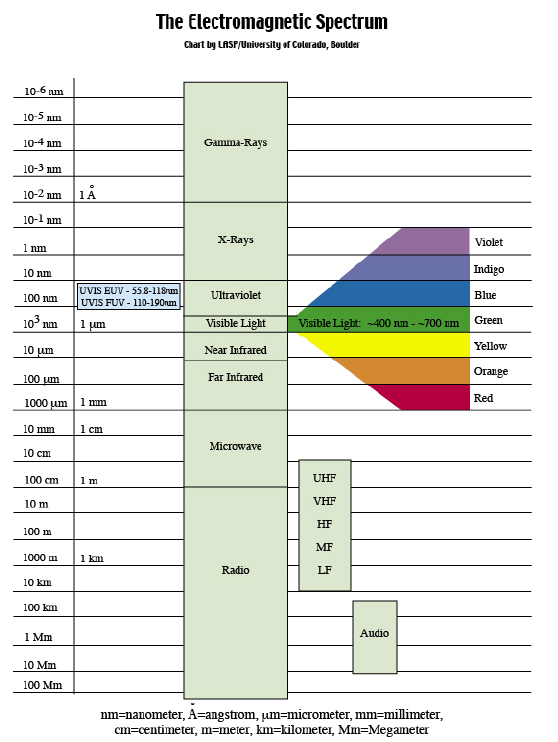 The visible light spectrum ranges from .4 microns to .7 microns in wavelength. Ultraviolet, X-Rays and Gamma-Rays have much shorter wavelengths then visible light and cause destruction of organic molecules with exposures of any duration.

Near Infrared and Medium Infrared Light ranges from .74 microns to 4.0 microns in wavelength and is visible to some animals but is invisible to the human eye.

Far Infrared Light ranges from 4.0 microns to 400 microns and is harmless to organic molecules at the lower end of this range.

Beyond 400 microns are the Ultra-High Infrared, Microwave and Radio Wavelengths. How does FIR transfer into heat?

The laws of thermodynamics state there are three ways heat can be transferred.

Radiation is different from the other two because with Conduction and Convection the medium must be heated before transfer may begin. Radiation transmits heat directly and spontaneously. Radiation does not need a carrier.

How does FIR create such a deep heating in the body?

Molecules that form an object have different vibration and rotation cycles depending on many subatomic principles. These rotations and transmutations of Carbon and Oxygen containing organic molecules in the body tend to resonate at regular cycles. This resonation is much like the frequency of a swing moving back and forth. When these molecules encounter an FIR wavelength of a resonant frequency it is much like giving that swing a push at exactly the right moment to project it further or make it more energetic. This phenomenon is called 'resonant absorption'. 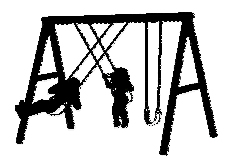 Compounds containing Nitrogen or Chlorine do not resonate at the same frequencies as FIR and thus do not heat up or become more energetic as they encounter FIR.

The BioMat Produces FIR in a wavelength from 5 to 15 microns.

By observing the chart above it is apparent most compounds in the body cannot resonate with low or medium infrared nor infrared much above the range emitted by the BioMat.

Because of the Resonant Absorption property of FIR the heating penetration is much deeper then through absorption and convection and greater still if the FIR source is in contact with the body as with the BioMat.

So what are the Physiological effects and health benefits of laying on the BioMat and receiving FIR Therapy?

1. Stimulation of the Autonomic Nervous System

2. Stimulation of the Circulatory System

4. Other benefits in using The BioMat and FIR Therapy

What about Negative Ions?

In the highly polluted urban areas, cosmic rays cannot come down very low because of the thick layers of pollution. Therefore, there are not enough negative ions to clean the air. It is a vicious cycle. High in the mountains and near the ocean there is a high concentration of negative ions. The counts of negative ions are expressed in terms of the number of ions in a cubic centimeter (cc). Up in the mountains and near the ocean the negative ion counts are in the hundreds per cc, while in the city, the counts are generally in the single digits.

Effects of ions on health and mood

It is reported that positive ions create depressed moods while negative ions provide euphoria. There are several brands of household negative ion generators on the market for this very reason. They are trying to simulate mountain top atmospheric condition by shooting out high counts of negative ions into the room.

The second theory is that negative ions increase alkalinity in the body while the positive ions increase acidity. As we know the water molecules are split into H+ and OH-. Negative ions will neutralize H+ ions and the remaining OH- ions will ionize normal unionized alkaline minerals. The net effect is to increase the alkalinity of the body. The reverse effects, i.e., the acidification of the body would be achieved with the positive ions.

These ions eventually leave the body. If they accumulate, you will get an electric shock when you touch a metallic object. The best such example is that when you are on a dry area walking on the carpet with rubber sole shoes on, you build up static electricity in your body. Then, if you touch a door knob, you get shocked. Ions and 'free radicals' cannot be stored in your body without changing your body's electric potential. Eventually they leave your body. But before they leave, they can change your body chemistry.

How do Negative Ions Change your Body Chemistry?

Each living cell is surrounded by a membrane which separates the world within the cell from its exterior. In this membrane there are channels, through which the cell communicates with its surroundings. Those channels consist of single molecules or complexes of molecules and have the ability to allow passage of charged atoms, that is ions. The regulation of ion channels influences the life of the cell and its functions under normal and pathological conditions. The Nobel Prize in Physiology or Medicine for 1991 was awarded for the discoveries of the function of ion channels. The two German cell physiologists Erwin Neher and Bert Sakmann have together developed a technique that allows the registration of the incredibly small electrical currents (amounting to a picoampere - 10-12A) that passes through a single ion channel. The technique is unique in that it records how a single channel molecule alters its shape and in that way controls the flow of current within a time frame of a few millionths of a second.

This alteration of shape and consequential admittance of negative ions provides the following:

It provides for a molecular massage adjusting the size and shape of each and every cell in the body as it admits ions through cell channels.

It provides for the admittance of negative ions and the recombination of these negative ions with positive free radicals. The free radicals are thus neutralized and easily excreted from the cell into either sweat or into the blood stream to be processed through the Liver and Kidneys and eventually out through urine or feces.

From the early amethyst healing beds, through the discovery of the infrared healing attributes NASA used to develop the modern spacesuit climaxing with the Nobel Prize Winning work of Neher and Sakmann, Richway Scientists have developed a healing instrument that surpasses any technology in the marketplace today. With FIR light penetrating the body 6-8 inches with energy focused and excited through a field of high quality Amethyst Crystal and supplemented by a thorough wash of negative ions, the body receives what it needs to help itself in a manner unavailable before the use of the Biomat.

One not only gets all of the healing energy to flush toxins from the body, clear blocked nervous pathways and negative ions to alkalize the body, but also provides oneself for a time of day to relax, meditate and find that space of peace of mind where one can rejuvenate and allow the mind to relax or explore in the comfort of ones own home.